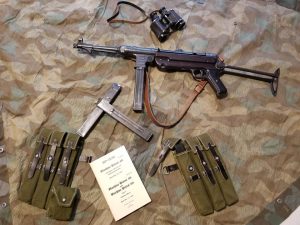 Often incorrectly called the “Schmeisser,” the MP40 was designed by Heinrich Vollmer in the late 1930s and was a simplified evolution of the MP38 machine pistol. Though they look almost identical, there are some key differences, mainly changing the construction of the receiver tube from milled steel to stamped steel. The magazine well was also simplified to stamped metal, as well as a few other design changes that lightened the weight of the weapon and simplified and cheapened production. This was so successful that over a million of these machine pistol were produced by various factories during the war. 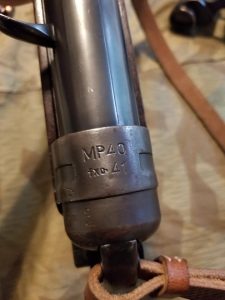 The MP40 is an open-bolt, blowback operated sub machinegun (SMG) chambered in 9x19mm. It is fed from a 32 round box magazine fed into the bottom of the receiver, unlike earlier German machine pistols like the MP18 and MP28 that were fed on the left side. It is fully-automatic only, unlike the Allied counterpart, the Thompson SMG, which was select fire. However, at a rate of fire of only 550 rounds per minute, it is easy to fire off single shots or controlled bursts. 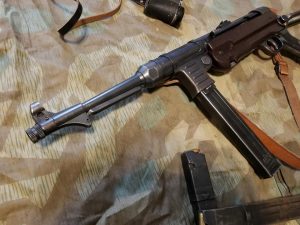 The MP was generally issued to squad leaders, officers and senior non-commissioned officers, vehicle crews, paratroopers, etc. It was issued with a sling, two 3-cell magazine pouches, a magazine loader, and a magazine cleaning brush. 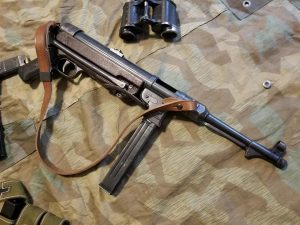 211th’s MP40: Our MP40 is owned by Obergefreiter Lindner and is a live, fully automatic transferable (legal) machine gun. It is what is commonly called a “tube gun,” meaning that it is original German parts built on a new-made receiver tube prior to 1986. The kit that was used to build this MP was a 1941 dated, fxo code kit produced by the Haenel factory. 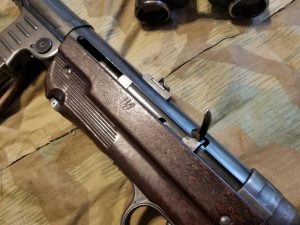 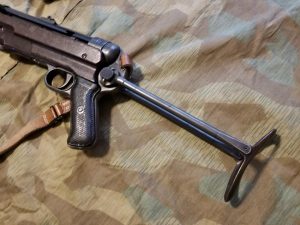