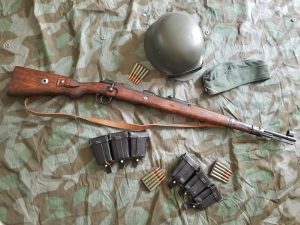 The Kar98K is a bolt action rifle and was fed by a 5-round internal, non-detachable box magazine. Short for Karabiner 98 Kurz (Carbine 98, Short), the K98 was a shorter and more modern version of Germany’s standard rifle of the previous war, the Gewehr 98. It used the same type of action and chambered in the same 7.92x57mm (8mm Mauser), but was obviously shorter, lighter, and featured a turned-down bolt handle and simplified sights.

In 1935, the K98 was adopted by the German Army as their standard issue rifle. It remained the standard rifle throughout the war for all branches of the German military, and over 14 million were produced between 1935 and 1945. Though commonly referred to as the “Mauser,” Mauser was joined by many other manufacturers to produce these rifles during the war. The design also went through various small changes throughout the war, such as replacing milled parts with stamped metal parts, changing the larger cupped buttplate to flat, and various other simplifications to speed up wartime production. 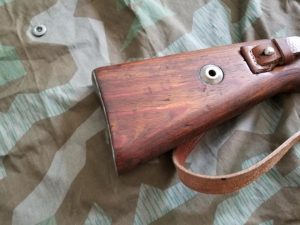 While outmatched by the American M1 Garand in terms of rate of fire, the K98 still proved to be a formidable rifle throughout WWII. Even with the introduction of he G43 semi auto rifle, the K98 was never replaced as the standard. This was likely because of not only wartime production limitations, but also the German infantry doctrine that – unlike the American squad – relied on the machine gun, not the rifle, as the main source of firepower during an engagement. 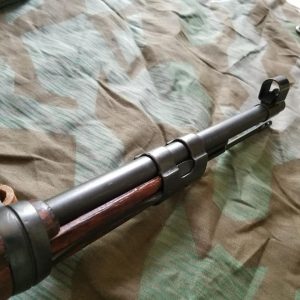 The K98k pictured here belongs to Obergefreiter Lindner. It is a bcd code rifle manufactured in 1941 by Gustloff Werke. As with many K98s, it does not feature matching serial numbers due to being captured by the Russians (denoted by a X mark on the receiver) and being rearsenaled without regard to serial numbers. It does, however, have some early features such as the milled front barrel band mixed with later ones such as the flat buttplate.