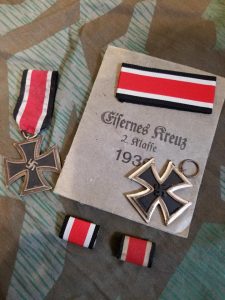 The Iron Cross dates all the way back to 1813 to the Prussian war against Napoleon, which is the reasoning behind the 1813 date on the back of the award. The 1939 Iron Cross, which is what we will be discussing, obviously came about at the beginning of the war in 1939 and came in two classes, 2nd (being the lower class) and 1st. There were also higher orders of the Iron Cross, such as the Knight’s Cross of the Iron Cross, etc, but as these awards were much more rare and generally for much more heroic and gallant acts, our reenacting unit will never award or use anything higher than the 1st class award. 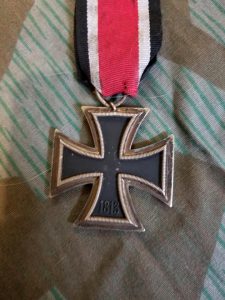 The Iron Cross 2nd Class (EKII), at the beginning of the war, was quite a prestigious award given for either actions clearly beyond the call of duty or a single act of bravery or heroism while engaged with the enemy. As the war dragged on, however, the award was given out much more loosely and by the end of the war, an estimated 4.5 million EKII’s had been awarded. The award consisted of the Iron Cross medal on a ring, hung from a red, white, and black ribbon. On the combat uniform, the full award was only worn on the day of award and then, after that, only a ribbon sewn into the second buttonhole of the feldbluse or a small ribbon bar above the left breast pocket was worn. 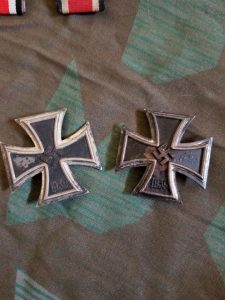 The Iron Cross 1st Class (EKI) was much more seldomly awarded and was generally for four or five acts of bravery or heroism that would have warranted the award of the EKII. Unlike the 2nd class award, the full 1st class medal was worn on the combat uniform. The 1st class medal was identical to that of the 2nd class, besides the lack of a ribbon and the addition of a clasp bar on the back for wear on the uniform. As mentioned, the EKI was not awarded nearly as regularly or liberally as the EKII and an estimated 300,000 were awarded by the end of the war. As such, this higher award will be much more rare of an award seen in our reenacting unit. 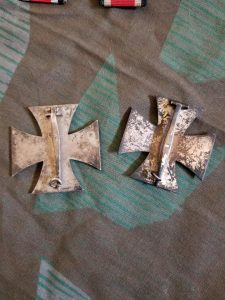 The awards pictured here are all originals from WWII. As you can see, there are some differences between even the same classes of the Iron Cross. This is due to there having been many different manufacturers of the awards during the war, as well as changing process as the war ground on. Pictured are two EKII’s, one with original award packet, two EKII ribbon bars, and two EKI’s.